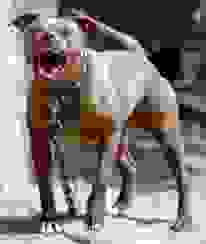 Authorities have reported that a 4 year old toddler has died as result of a horrific pit bull attack yesterday on Tuesday, March 25.

The Houma Police Department said the 4-year-old girl died from the severe facial and head injuries she suffered in the mauling at the Houma Highlands Apartments in Houma around 7 p.m. The mother also faced injuries after trying to protect herself and her daughter after the mauling. Authorities report that the dog was behaving in a vicious manner, and the mother and daughter had tried to get away from the dog but couldn't escape the attack even after barricading themselves.

The young toddler died in Terrebone hospital yesterday after the mauling occurred.

According to the Center of Disease Control and Prevention:

The State of Louisiana has a dog bite statute that requires a dog bite victim to prove that the incident was one which the dog owner could have prevented. The statute is Louisiana Civil Code article 2321:

The owner of a dog is strictly liable for damages for injuries to persons or property caused by the dog and which the owner could have prevented and which did not result from the injured person's provocation of the dog.

Dog owners are strictly liable for any injuries that their dog may cause. The Supreme Court of Louisiana has held that a dog bite victim is required to prove that the dog posed an unreasonable risk of harm, in addition to the facts that must be proved in the more common dog bite statutes (i.e., that the defendant was the owner of the dog, the dog caused harm to the plaintiff, and the extent of loss to the plaintiff). Pepper v. Triplet, 864 So.2d 181 (La. 2004).

Tips for dog owners to prevent any possibilities of attack on others are:

We at the Tomeny Law Firm possess the experience and the knowledge of Louisiana Dog Bite law that will help to prepare a strong case. If you have any questions about dog bite injuries or accidents, call us today!

For the article on the 4 year old toddler mauling click: http://www.wafb.com/story/25077600/4-year-old-girl-dies-after-getting-mauled-by-pit-bull